When I studied in Paris during college, I lived on a small, residential street in the 13th arrondissement, just off of the Place d’Italie metro stop. On the walk from my flat to the metro, there was one lone bakery, so small it was indistinguishable as a bakery. And it was never open. Puzzling to say the least, I never thought too much about it, except for the occasional sadness that it must have fallen on hard times and been forced to close. Until one day when I was walking home from the metro around 5pm (a rare occurrence, as we left the flat every morning at 9am and often didn’t return until 12 hours later), and to my shock, it was open. There was a queue out the door of people in their work clothes, laden with shopping bags on each arm and talking to each other at a bustling pace. They were all buying bread for dinner.

Not until I moved to San Francisco almost three years ago did I think about that bakery again. My good friend, Arif, knowing well of my baking escapades in my own kitchen, said that I MUST go to Tartine Bakery as soon as I moved to SF. (I did him one better and went during my initial visit to the city, and promptly decided that I could in fact move to SF, I wouldn’t be deprived of legit pastries and croissants upon leaving New York.) And on my visit I learned that they did this crazy thing — they baked bread in the afternoon so customers could have it fresh for dinner around 5pm.

All who know me know that I think about Paris often. Every day, probably. And on my yearly visits to the City of Lights, I pack as many pastries, croissants, baguettes and other warm, fresh, floury goodies into my purse as I possibly can. For my birthday last year, I even designed my itinerary around the five new bakeries garnering croissant acclaim across the city. For my trip this spring, I devised a part deux to my original croissant pilgrimage, with the help of my friend Seb’s croissant safari — although he and I respectfully disagree on which is the best in the city. So ending up at a cooking school in Ireland, not France, was enigmatic to many people. Sometimes even to myself. But now I can proudly say that it was in Ireland when I truly fell in love with bread.

It all starts with a starter. Still a novice to the craft, I won’t dare to explain all of the science behind the art (for that, you should read the first chapter of Chad Robertson’s Tartine Bread cookbook — 39 pages for one bread recipe). But essentially, a starter is where it all begins. A combination of flour, water, salt and yeast from the air (natural yeast) makes this bubbly, active, smelly, wonderful mixture that you use some of for each loaf of bread. At cooking school, we carried ours around in Kilner jars like babies — kind of like the hard-boiled eggs in a basket they give you in third grade to teach you what it’s like to be a parent. We labeled them, we named them, we fed them, we loved them. There were daily discussions about our starters like only a group of bread-obsessed culinary students could have. I started my starter from the school’s starter, which was seven years old. Yes, seven. There are different schools of thought around if you should keep a starter in the fridge or at room temperature, how often you should feed it, etc. etc. But we kept ours in the kitchen, not the fridge, and I fed mine weekly — the day before I wanted to start a sponge. 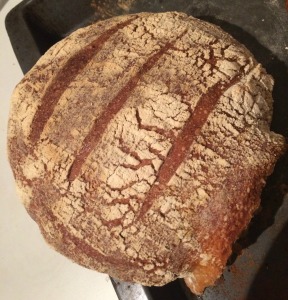 my first loaf of sourdough ever

The sponge is the second part of the process — where you take a bit of your starter (about 100g) and add equal parts flour and water to it to bulk it up. Leave it overnight and do the same the next morning. By mid-day, you can take 340g of this new “sponge” and get going, adding various flours, more water, some salt and then set the dough up in the stand mixer to be kneaded with a dough hook. Once it pulls away cleanly from the side of the bowl, cover the bowl with plastic wrap and let it sit in the fridge overnight.

The next day takes patience. For about one hour, you fold the dough every 20 minutes using a dough scraper in a very particular way. Then you wait another hour for it to rise. Then you can finally shape it into a ball, put it into a flour-lined basket and back into the fridge it goes, overnight.

my last loaf of sourdough on the farm

Finally, the following day, you’re ready to bake your work of art. High heat and constant moisture are key, and about 45 minutes later your sourdough baby is born.

This may seem like a hell of a lot of work for one loaf of bread. And let’s be honest, it is. But after doing this weeks and weeks on end, I now understand that it’s a labor of love. It is the true merging of art and science in a way unlike any other I have known before. So many variables can affect the final product — temperature, temperature change, moisture, your hands, etc. It’s like a game that changes every time you play it, while you’re always striving for the same finish line.

If someone had told me five months ago that I would become obsessed with baking loaves of sourdough, I would have laughed. I’m obsessed with cakes, yes. And tarts, definitely. Cookies aren’t anything to sneeze at either. But this new love was of one of the seemingly most simple forms of baking, but through its complexity and through my patience came a deep connection and infatuation.

So yesterday when I ventured down to Tartine Bakery to meet with their head of bread and Chad Robertson and the team, I thought of that tiny bakery in Paris that I walked by every day 17 years ago. And I smiled when I thought about all that has happened in the 17 years since. And I smiled even bigger when I thought about next week — and how I would be baking Tartine bread, at Tartine Bakery, under the tutelage of the masters. Following my heart, and my new love.

cutting hot loaves fresh from the oven boarders on orgasmic (mine at left, my cottage mate’s beer loaf at right)

2 thoughts on “the day I fell in love with bread”