Last weekend I gave birth to my first two bread babies. Why such a strong analogy? Because it’s accurate. Starting on Friday night and ending on Sunday afternoon, I only left my apartment to eat (once) and go to a yoga class (once). Every other minute was spent making bread.

my first San Francisco bread baby, just out of the oven

When friends ask me innocently, “How long did it take you to make this loaf of bread?” I think they expect the answer to be something along the lines of, “A few hours.” So when I say, “About two and a half days,” the looks I receive in response are awesome. Shock, awe, confusion — it’s brilliant. A few months ago, I wouldn’t have believed it either. I know very few people who bake real bread at home — there was the guy I had a crush on in London who did a bagel experiment with the water I brought him from NY (and then documented our adventure in his book, The Breakfast Bible); my friend Gail’s husband, whom I need to clone; and the guy I “dated” last fall, whom on our first date brought me a loaf of fresh sourdough he had just taken out of the oven (perhaps I fell in love with his bread more than him, in retrospect; darn bakers get me every time). But seeing as I can count them on one hand, I don’t have many bread makers in my life, so I was blissfully unaware of how much of a labor (arguably a labor of love, thankfully) it is to bake a loaf of bread.

So, cooking school was the first place where I really learned and understood how much is involved in making bread — and how a few simple ingredients (flour, water, salt, yeast) could require so much care and feeding, quite literally. But at cooking school, we did it together. As a team, as a supportive group, occasionally with some wine. Here at home, I’m all alone. I’ll admit that it took so long after getting back home (about a month) to start making bread here because I was scared. Scared that I wouldn’t remember how to do it. Scared that I would fuck it up. Scared that I would realize I couldn’t do it, and then what? 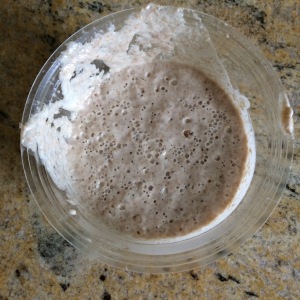 Eventually I got my ass off the couch and started to start a starter. I was insanely motivated, ready to jump out of the gate, ready to take on the world one bread at a time, until… I couldn’t find the right flour. Boom. Feelings of defeat as I walked from store to store to store (I tried five) to find whole wheat bread four. Nada. There was literally every other kind of flour available (especially in this hippie dippy city where gluten is often an enemy) except the kind that I needed. (Now I’ve come to learn that most, if not all, whole wheat flour is bread flour, unless it’s identified as whole wheat pastry flour. Phew.)

I gave in and called the big guns. My bread mentor. For whatever reason this person has come into my life (probably the universe’s doing, and sometimes I believe in that kind of stuff), I’m thankful for it.  I was panicked and deflated, searching for flour, the San Francisco May winds literally pushing me backwards on my journey from store to store. It sucked. I needed help. So, I gave in and asked for it. [Those who know me well know that I’m a classic Type A, overachieving perfectionist. As much as I hate to admit that and as long as it has taken me to admit that, it’s true. I’m fiercely independent and insist on doing things on my own whenever possible. It’s quite ironic, though, since I love being around people and too many hours spent alone make me very sad. But it is what it is and I am who I am. At least now I can recognize these traits and try to be self aware whenever possible.] In the baking aisle of Whole Foods on Franklin Street, after I had been staring at the endless bags of flour that were not the ones I wanted for what felt like hours (and must have looked like it to all the people walking by), I pulled out my phone. “Can I use regular whole wheat flour for my starter? –> Yes, of course.” Wow. It was that easy. And so it began, my weekend of bread love. 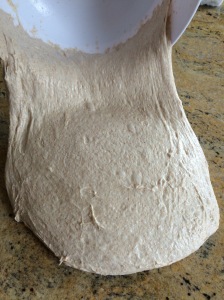 my favorite part is when the dough ball flops out onto the counter, holding on for dear life with its stretchy bits

Starter aside, the process of making the dough takes hours. After you’ve mixed up the initial combination of flours, water, and levain (aka starter) based on whatever set of percentages you are following, you let it sit for 20 minutes. This is called auto lease. It’s French 🙂 I need to read more about the science behind it, but essentially this short resting period helps the bread start relaxing. We like it when bread is relaxed. After the auto lease, you sprinkle on the salt, add the second batch of water (referred to as the second hydration), and massage it all together. Bread likes to be relaxed and massaged. I can totally relate. Then patience needs to kick in. You fold the bread once every 30 minutes for three hours. Yes, three. It’s important to keep it warm during this phase, so that it can, you guessed it, relax. After those three hours of folding are up, you let it rest for another hour untouched. (Finally a break to fold laundry, go to the store, be a human.) Once it is sticky and stretchy and all around yummy, it’s ready for the first shaping.

the key to shaping is tension — the tighter the better

The nuances of shaping are almost impossible to describe in words (even bread God Chad Robertson uses pictures in his book), but in essence you need to carefully, gently fold it into a beautiful ball. Again, all while keeping it relaxed. Then you wait. About 20 minutes should do the trick, but environmental factors definitely come into play here — warmth, cold, drafts, etc. So I’ve been instructed by my bread mentor and all others who have ever made bread that you just need to feel it and trust your gut. The more you do it, the smarter your gut will get.

Next comes the basket phase, another gentle mission that could fuck up your final product if you do it incorrectly. First you conduct the “final shaping” (again, too complicated for words) and then carefully, delicately but with assertion, but your dough baby into a basket lined with a tea towel covered in flour (rice flour is ideal because it’s slightly grainier than regular flour.) Then you let it rest. Again. For an hour. California is honestly the best place to make bread because all it wants to do is chill out. 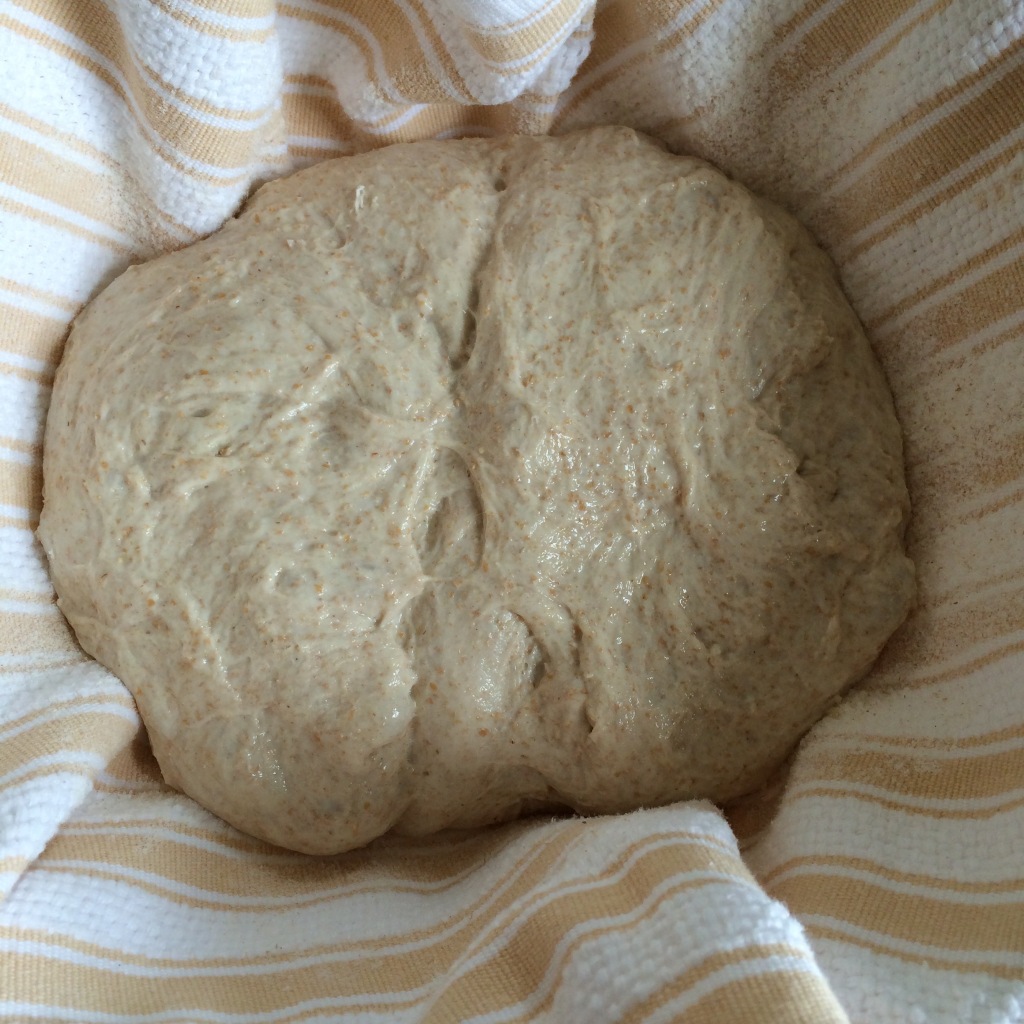 tucked away neatly in her basket, chillin’ yet again

After an hour, you can pop it into the fridge to retard (aka proof or rise slowly) overnight. And if you’re like me, you’ll peek at it constantly throughout the night like you would a sleeping child, just to make sure it’s OK. Holes and bubbles are good. In fact, they’re great. My bread mentor says you want a dough that’s full of air and full of life. (To be honest, at first I thought that was a bit corny and romanticized, but that was before I made the dough. So now I love my bubbly bits.) The next morning when you’re ready to bake, preheat the oven to the highest it will go. Yes, really. I set mine to 500F degrees and let it preheat for one hour. Ideally, you’d be baking it in a Dutch oven (aka cast iron casserole dish) turned upside down so that the lid is the base, and you’d be preheating this, too. If not, you’ll need a spray water bottle so you can mist inside the oven at least every 10 minutes to keep the moisture level up. Dough likes to be relaxed, massaged, and moist. And that’s all we’ll say about that.

my baby emerging from her casserole dish

When the oven and Dutch oven are hot and ready, you’re ready to roll. Do the following as quickly and as carefully as you can:

1. Find the most durable oven mits you own to remove the dish from the crazy heat

2. Invert the dough ball from its basket onto the lid of the dish (you’ll thank the rice flour at this stage) in one quick but controlled motion

3. Score the dough in a square pattern using a sharp razor blade; hold the blade at an angle and make quick but firm cuts — show the dough who’s boss

4. Pop the bad boy into the oven and lower the temp to 400F degrees

After 20 minutes, carefully remove the whole dish from the oven and slide her out, directly onto the oven rack. She’ll be pale and hopefully her square design will have popped up from the rest of the loaf. During this next baking phase, she’ll get golden brown and develop a crisp, thick crust. Arguably, this is probably when you should watch her the most because EVERY person I know who makes bread says there is no exact cooking time. You just have to know.

When she’s golden and crispy and sounds hollow when you flip her over and knock her bottom with your fist (yes, do this, really), she’s ready. My loaves took about 25 minutes more, but I prefer a darker color. I like to gently push the top of the loaf underneath the square design to check for the perfect balance of squishy soft inside and serious crust. You’ll know what I mean when you do it, if you ever do any of this, just push it like Salt-n-Peppa taught you. The rest of the crust should feel very crisp — the longer it’s in the oven, the thicker the crust, so bake it as you like it. There’s just as much to how a bread looks as how it tastes, so this is when you can really have fun geeking out about color and texture and crust and all that jazz. 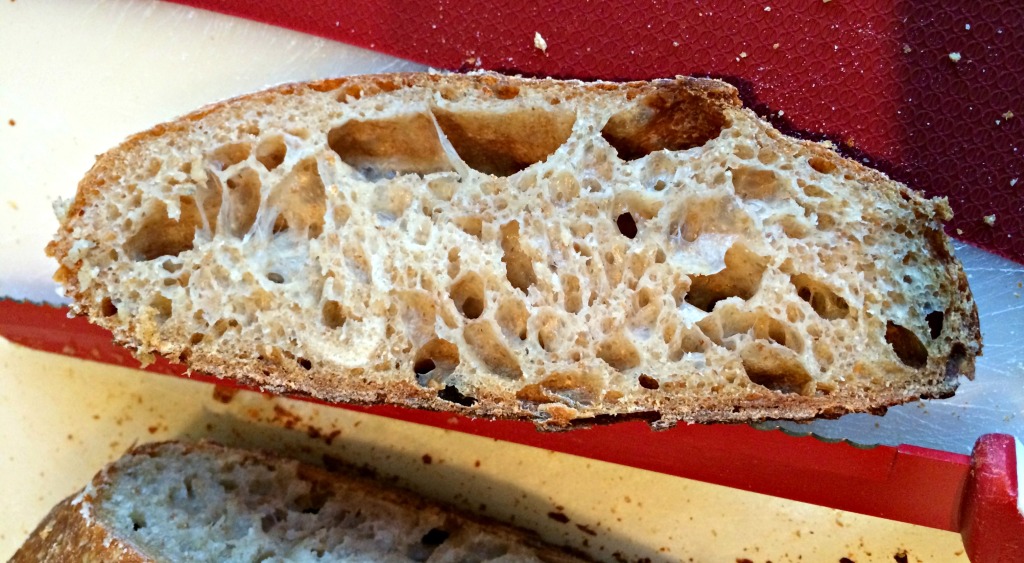 But the true golden ticket lies inside. Inside is affectionately called the “crumb.” Will there be bubbles? Will they be big? Lots of bubbles mean you done good. The crumb on my second loaf was way better than on my first. I’m still trying to figure out why, but all of this is, after all, an experiment — and that’s half the fun.

the next day I did it all over again, and added some sesame seeds

To celebrate the end of my weekend of solitude, I invited some good friends over to eat my buns — hot from the oven, smothered in soft cheese, ridiculously ripe farm tomatoes and fresh basil. With wine. Lots of wine.

We might have fallen victim to some bread comas that night, but hell if it wasn’t worth it, I don’t know what is. If you don’t break bread with the ones you love, you’re missing out. Big time. 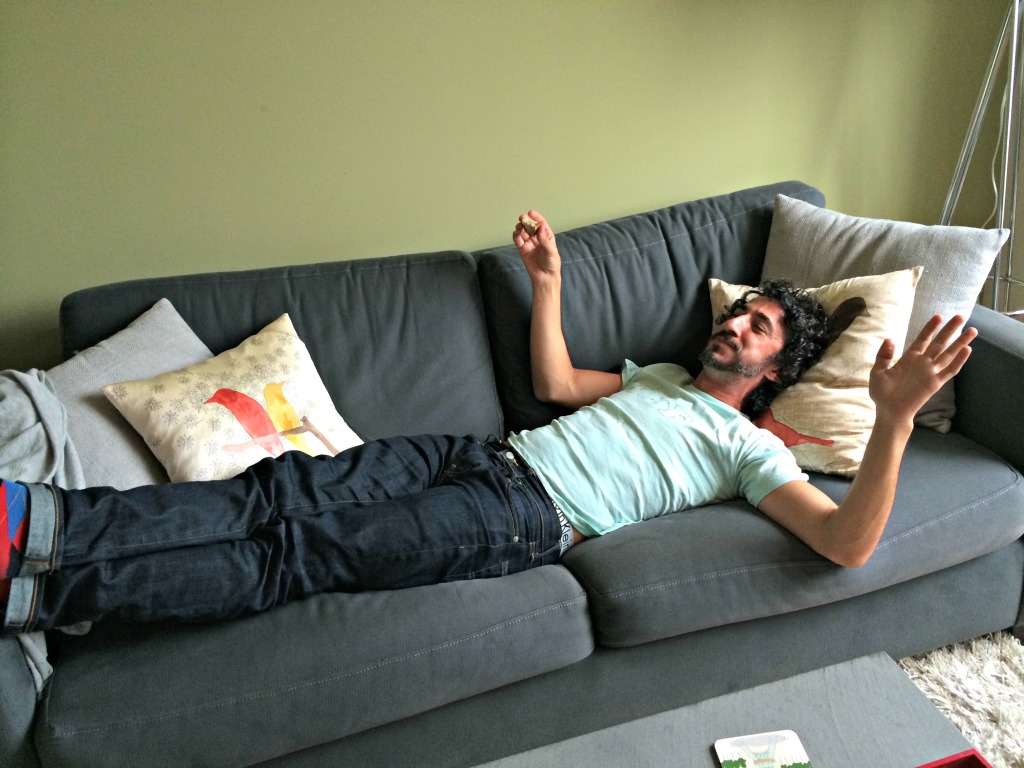 2 thoughts on “my buns are out of the oven”