For as long as I can remember, I’ve associated baking with love. As cheesy as it sounds, that’s how I roll. (Pun slightly intended.) From baking a loaf of sourdough and adding “loads of love,” to the simple, pure happiness I feel every time I take anything out of the oven — baking is love. And then there are those I bake for. And with. 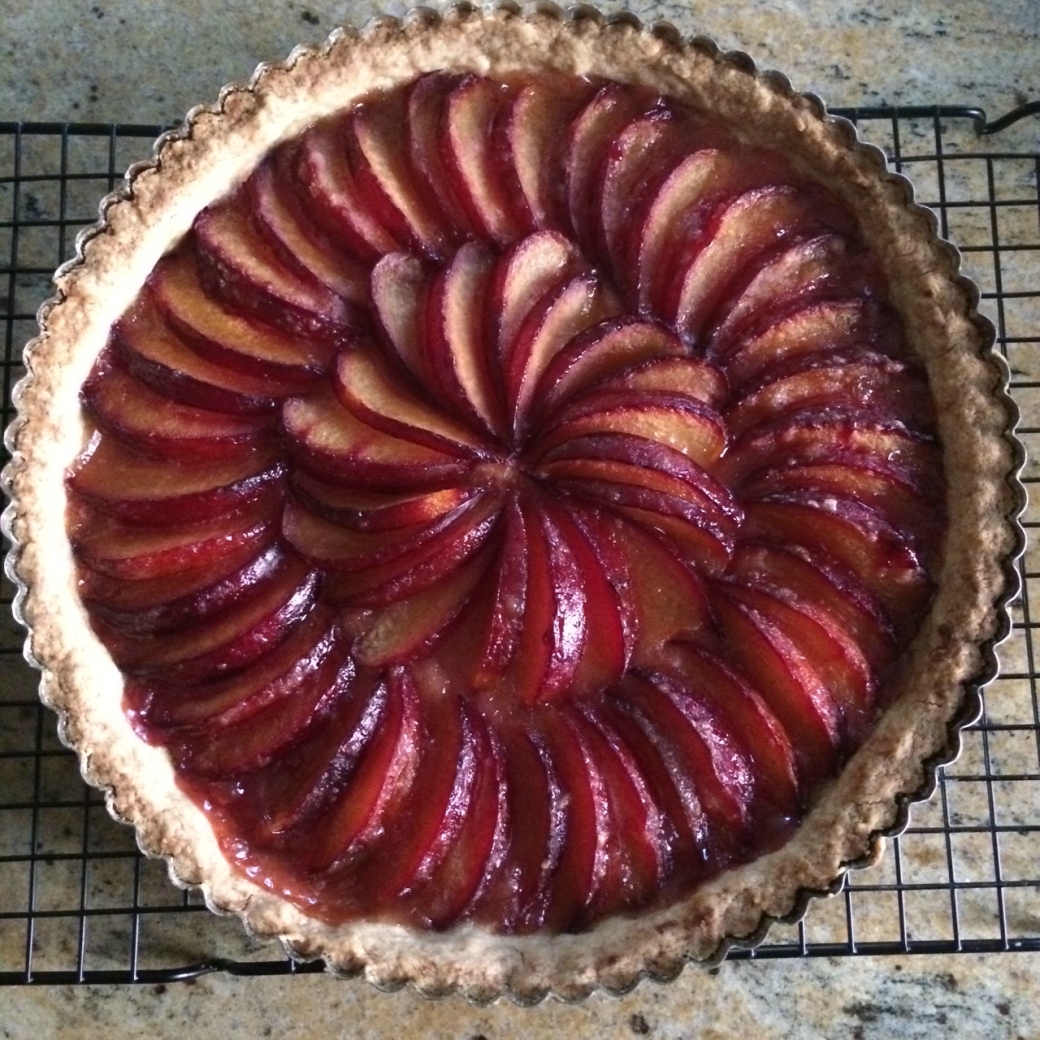 Aunt Judith’s fruit tarts and I go way back. On a visit to Maine so many years ago I lost count, she presented a wild Maine blueberry tart at the end of the most perfect lobster dinner, and I fell in love. Since that night, I’ve baked countless Aunt Judith fruit tarts — her mother’s recipe from Iowa. Between her mother, her sons, herself, me and whomever else is lucky enough to have the recipe, I can’t even imagine how much love has been spread via “Aunt Judith fruit tarts.” Last week, Aunt Judith lost a very dear friend. She texted me today to say what she had been cooking for the family and simply said, “I’m baking tarts to take over. He loved dessert.” 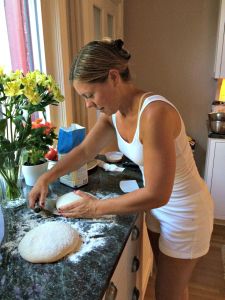 Aunt Judith snapped this one while my hands were full… sneaky

Last week when I visited Aunt Judith in Maine, we baked bread together. I put my sourdough starter in my purse (OK, technically my checked luggage) in San Francisco, and whipped it out as soon as I arrived. We named her Gracie, fed her every day, and by mid-week, there was bread. Sam and Judith are possibly the coolest, most hilarious people on the planet, so the event was not without its fair share of shenanigans. But it was worth every minute. They are love. 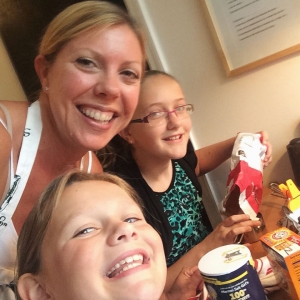 we have chocolate cake! but sadly, no oven

Today I surprised my two favorite munchkins, my nieces, who thought they were just heading to Oma and Opa’s house for Sunday dinner and standard Mersel shenanigans. I told them I flew 3,000 miles because I really wanted to bake a chocolate cake with them. And it’s true. We’ve been baking together since Jamie was just learning how to read and Lauren was just able to sit in the kitchen chairs and not topple over. We’ve made countless chocolate cakes (and cookies, and brownies, and cupcakes, and cheesecakes — but it should be noted that Lauren doesn’t actually like cheesecake, she baked it because Jamie really likes it — and flag cakes for Oma’s July 4th birthday, etc. etc.), but today we made Aunt Judith’s mom’s chocolate cake with fudge frosting (yes, Julie, I saved you a piece). Well, we sort of made it. The oven broke and we ran out of time to make the frosting, but like the awesome little troopers that they are, we all went over to the neighbors’ house together to ask if we could use their oven for about 35-40 minutes. Within minutes, my nieces were playing with the neighbors’ kids and not too long after, we had chocolate cake and big smiles. They are love.

The first time I baked a chocolate cake with my Godson, Alden, he was barely one year old. We gave him the beater to lick at the end and he looked at it like an alien from Mars. His Dad had to show him what to do with it, and skeptically he followed suit. Within about three seconds, the smile on his face was bigger than Mars. I can remember that day like it was yesterday, seven years ago. He is love.

My mom and I used to bake a lot of chocolate cakes together. Her famous German chocolate cake (to be noted: chocolate cake from Germany, not the kind that was named after an American chocolate maker) graced many birthday parties.  We had the special dark chocolate glaze sent over to the U.S. from relatives in Germany. From my mom, I learned how to tell when the batter was completely mixed, how to properly fold in chocolate chips, how to grease cake pans and unmold them after the cake had cooled, and how to perfectly melt and spread the special German chocolate over the top. It’s the first thing I can ever remember baking, and it’s pretty much what I attribute my love for baking to. There’s not much in this world that can beat baking a chocolate cake with your mom. In its purest form, it is love. 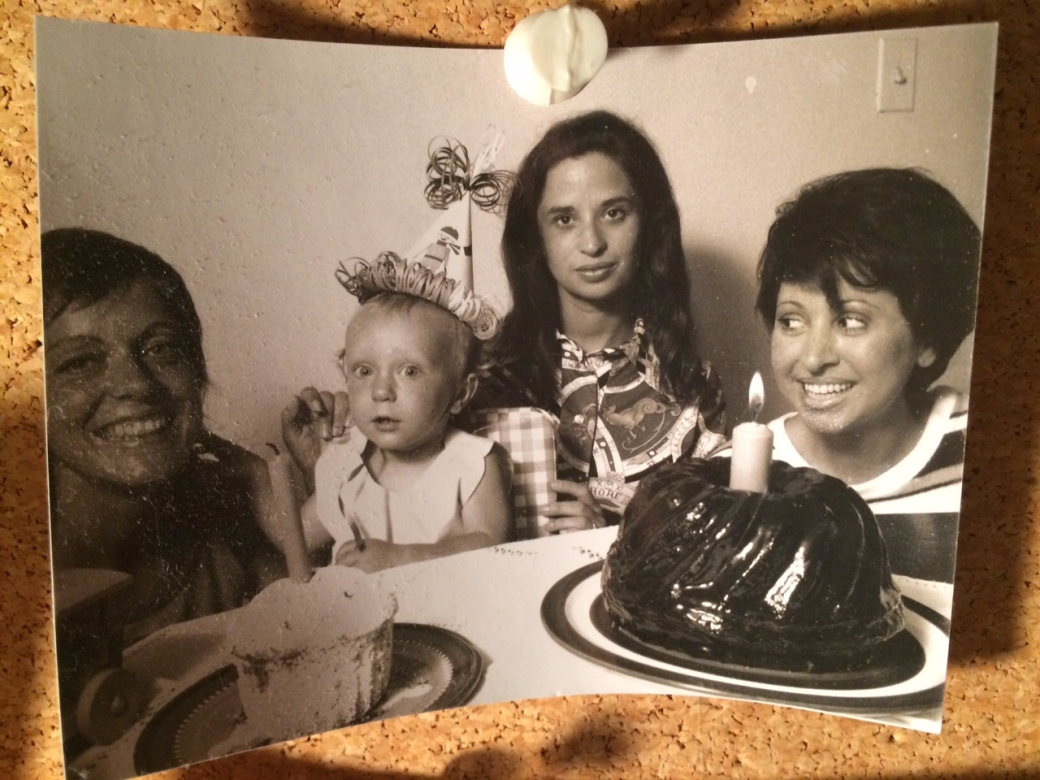 from left to right: my mom, brother, random stranger and my aunt at my brother’s first birthday party… with the famous German chocolate cake (which my brother seems oddly scared of)

3 thoughts on “baking is love”